Following the unveiling of the designer Olympic kit reports have deemed Stella McCartney’s designs as “too blue”. Now let’s be honest, no matter what the design, there was always going to be someone out there who was going to pick fault with it. Critics were probably poised ready to fault something with her design from the second Stella was announced as the official designer. She did have a tough job ahead of her trying to keep the whole country happy whilst also ensuring the designs were both practical and comfortable for the athletes.

The design is simple but stylish and one thing Stella was very cautious of during the design process was making sure our team stood out from the likes of France and America who have the same colours in their flags. The kits themselves do incorporate the red, white and of course blue of our flag but not in the obvious way some people appear to have wanted. 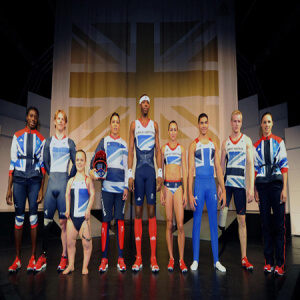 Yes, the flag has been made completely blue but the rest of the kit is white with a red trim. Rather than complaining about the over-use of the colour blue, maybe it’s time we just start to get excited about the event itself and leave the athletes themselves to decide if they are happy and comfortable wearing their new kits.

As expected there has been quite a mixed reaction from the press although the majority of reviewers have managed to find pieces that they do like if not all.

“Some pieces were lovely – such as the loose and low-key basketball kit and, at the other end of the spectrum, the sequin-splattered gymnastics leotard – some less so, such as the union flag-heavy Lycra shorts and the running pants for women with the flag in a gynecological spot, surely an offence that could result in one being sent to the tower.” – Hadley Freeman, www.guardian.co.uk

“WIN or lose, this year’s team are going to look good doing it. I love her contemporary take on the design. The gymnastic leotard in navy with rhinestone detail was an obvious favourite for me — a fashion girl who loves a bit of sparkle. But across the board, the sleek, modern feel does Team GB proud. Signing up Stella McCartney is a cool move for the Olympics and for Adidas. As she stood shoulder to shoulder with the athletes to much applause from the crowd, I thought yes, this is a kit worthy of gold.” – Saskia Quirke, Associate Fashion Editor, The Sun

“It’s sleek, it’s stylish, it’s modern, it’s flattering and above all its functional. Team GB’s new Olympic kit is all the things you would expect it to be, given that it’s designed by Stella McCartney, a woman whose designs are a by-word for all of the above, and loved (or fantasised about) by women the world over for precisely those reasons”. – Sam Baker, Red Online

“The lack of red is a major surprise and is a slight shame seeing that the use of the flag on all the kits is an original but very acceptable design and was the primary focus of McCartney’s work. The red simply didn’t need to go.” – Dan Ripley, Daily Mail

So here’s the big question, what do you think? Are you a fan of Stella’s designs or do you think she has taken away the British feel by turning the Union Jack blue? If it were up to you how would you have designed the kit?