It’s hard to find a magazine or newspaper that isn’t discussing Rihanna’s fearless outfit choices and after her recent collaboration with Armani’s Jean and Underwear lines, it comes as no surprise that she is currently in talks about launching her own clothing line. 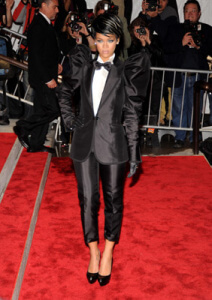 With this in mind, we have decided to have a look back at some of Rihanna’s most memorable fashion choices…

In 2009 Rihanna was seen sporting this female tuxedo look by Dolce & Gabbana at the Costume Institute Gala inNew York. While other female guests went for traditional long gowns and dresses, Rihanna decided to make a statement with cropped trousers, a bow tie and a tuxedo jacket with puffed sleeves. 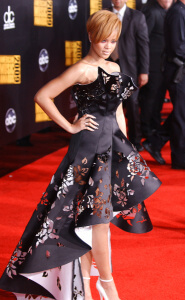 At the 2009 American Music Awards Rihanna opted for this dramatic black and white floral cut out design by Marchesa. Teaming it with some white ankle strap shoes finished this daring look. 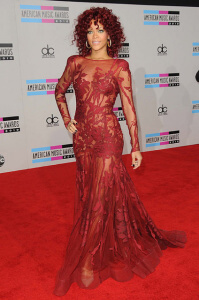 A year later at the 2010 American Music Awards Rihanna was a vision in scarlet. She wore this lace floor-length Ellie Saab gown with a low cut back and accessorised with some Christian Louboutin heels and a mop of curly red hair. 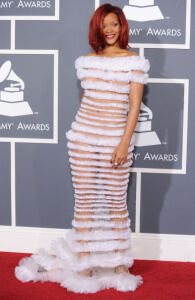 Rihanna left little to the imagination in this Jean Paul Gautier dress in 2011. The strapless gown was made from a sheer nude material and was wrapped top to bottom with some white silk ruffles. 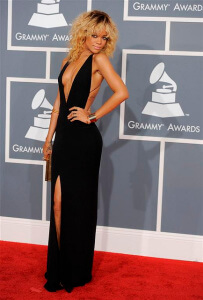 And finally, who can forget her amazing Armani dress she wore to the Grammy’s earlier this year? She helped design the black dress which featured a low cut front and back and a thigh-high split.

Some of her outfits may not be to everybody’s taste, but with her distinctive and ever-changing style, we can’t wait to see what Rihanna has in store for her collection.